In this game you are pretending to increase the amount of underground water, but you have limited amount of bombs and the water dries pretty fast. Have fun while playing with simulated fluid!

Why the game is getting harder and harder?

Well,  in real world the water sources are drying really fast, oftentimes before soaking deep into the ground. Meanwhile, the underground water is a source of water for people. We can't treat it as an unlimited source. Due to global warming and increasing (at an alarming rate) consumption, sources are insufficient. Bear in mind this keynote, live and take care of lives! :)

Playable on mobile phone browsers too! ;)

Very interesting game with a nice message! I enjoyed this puzzle game but one thing I realized is that if you had 4 bombs in a level you could only use 3 and when you then used the last bomb the game restarted. Lots of times the water would've reached the logo if the water would've had time to flow down to it after using the 4 bombs.

Over all this was a very nice game and the animation of the water was mesmerizing :D

I don't know if you've heard of Game Development World Championship before (gdwc2019) but it's a competition for indie game developers where they can submit their games and it's free! It's great if you want some more visibility for the game and it only takes a couple of minutes to join :)

Thanks for the review and a bug report! :D GDWC, hmm, interesting idea, I'll check this out, thanks! ;)

Reply
The GDWC328 days ago

Nice, small and simple. This fluid stuff is kinda fun. I did have an intermittent issue with it not loading a level. It would say "Loading" and then "Level 1" (or some other number), and then never load. At one point my browser complained that a script was running slow. Maybe there's some weird infinite loop happening or something. It's not every time though, a refresh usually fixed it. The only other thing about the game, is it's hard to tell which tiles you will remove. Sometimes I click and get a whole square, sometimes it's just half. It's kind of neat to have some time-limited levels in this sort of thing.

Thanks for the review! :D Taking into account it's a jam game, I have in my mind there might be some bugs. For me, loading in browser sometimes behaves like in your case - I suppose it could be because of almost 300-1000 fluid particles in each level :D I'll investigate it further. I think I can add some indicator showing which tiles will be destroyed after clicking, thanks for a suggestion! ;) Further levels are indeed time limited - every droplet is drying in a moment and when all of them will be gone, the game will be over. 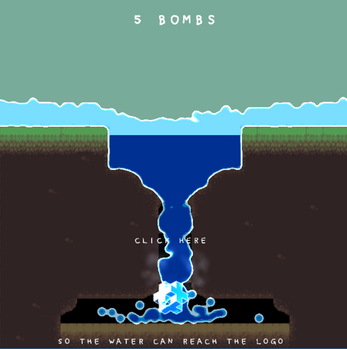 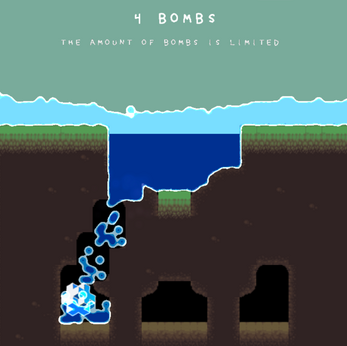 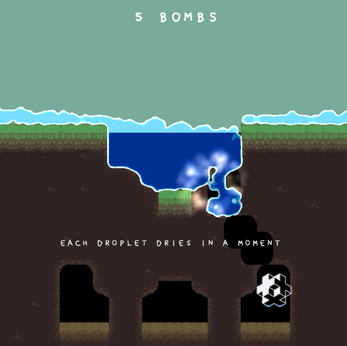