A gripping platformer RPG with a unique system of interactive elemental magic and a strong emphasis on story, set in a dark fantasy world inhabited by deadly monsters and vivid characters. Become a young witchcrafter Estel striving to control 4 elements on a journey to find the fifth one and your kidnapped father!

Currently in an closed alpha version - you can support me on Patreon or Ko-Fi to get an instant access or subscribe for updates to have a chance to participate in alpha:

You are Estel - a young boy raised by an old witchcrafter Trismegistos, who taught you everything about the world, magic and alchemy. You are living in isolation, far to the west of the northern empire and striving to learn how to control your power of elemental magic.

Estel will need to face a mighty emperor of Navia - Mordon, who kidnaps Estel's step-father and invades Emporia to get the legendary stone, Xerion - fifth element allowing to control the matter without any limits.

Witchcrafter: Empire Legends is a story-rich adventure.
Your choices will impact the world, plot and relations between characters.

During his journey, Estel will make both new friends and enemies. Although, the world is not so black and white and people have their own businesses making use of a naive boy. Characters are well defined and has their past described.

Emperor Mordon (left) with his aidee visited emperor Ronar and wanted to know if legendary Sorcerer's Stone - Xerion - is held in his castle. Trismegistos (right, with a wand) was at the court a master of witchcrafters back then.

Emporia is a dark fantasy empire full of artifacts of old civilizations beliefs in several gods. Its legacy is shaping actual worldview of folks living here, although many of them has conflicting views. Witchcrafters are not so welcome in many places, because people tend to believe they caused the war and fall of the empire after the Night of Shooting Stars.

I'm still developing the game, so if you want to see a progress, give feedback or share your ideas - I'm open!
Sign up to my newsletter to be up to date with all news and have a chance to participate in closed alpha/beta!

Feel free to follow me here on itch.io or:

Dusk of the humanity - a short story set in the world of Witchcrafter (.pdf) 89 kB

hey uh, why is the download a pdf file?

Hey! The game is in development still ;) The PDF file is a story set in a world of Witchcrafter, written by my brother ;)

Still Love it!! Never will change my mind <3

Thank you! Always can count on you! :) 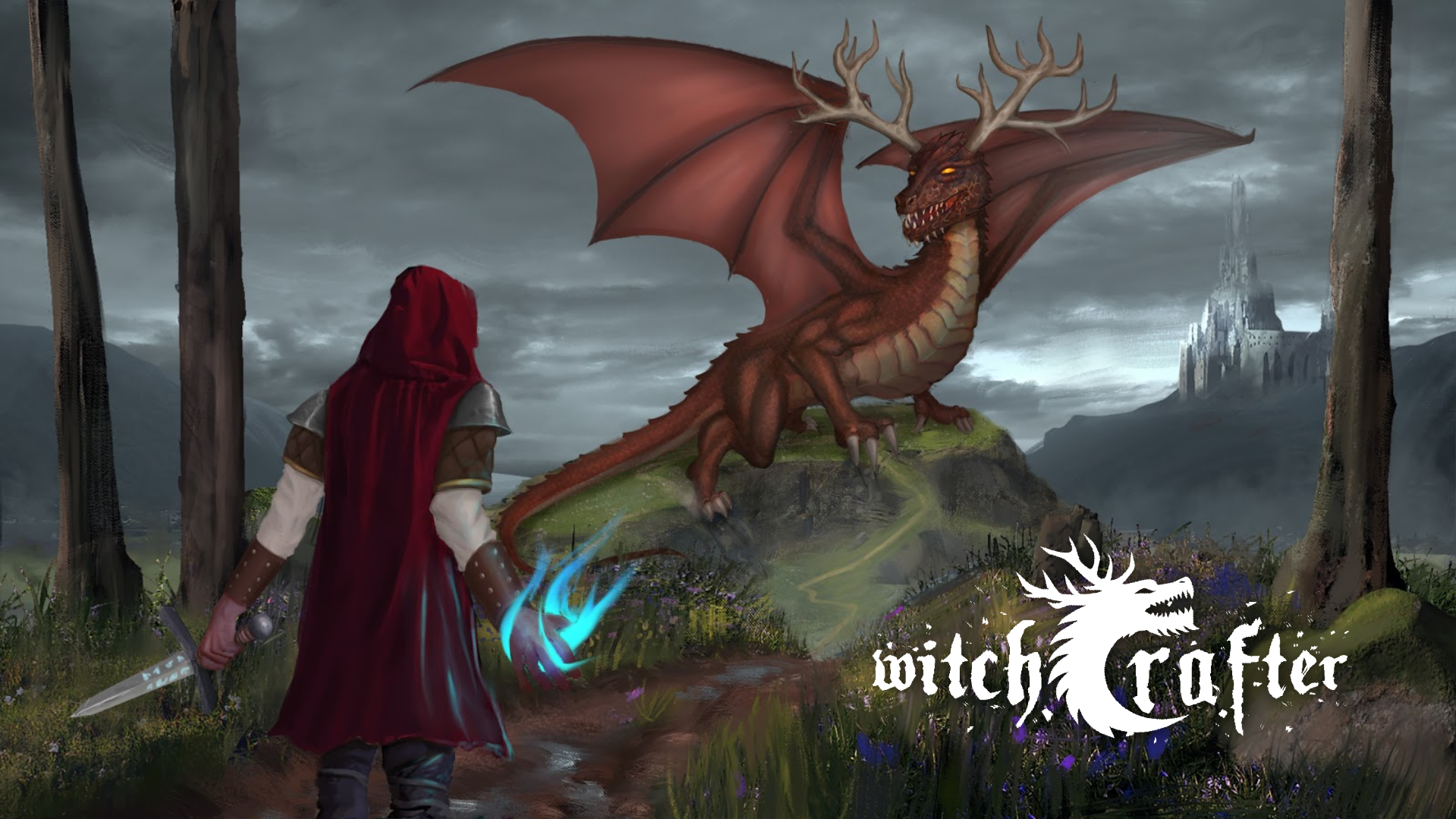 As soon as I start the game, it opens with a Press E to talk prompt, and when I press E it doesn't respond

Hello Prince Hector!
Sorry to hear that! Which version did you run? HTML5 version is working for me and many other people - maybe you clicked out of the game window?
By the way, thank you for following Witchcrafter! In fact, there will be a new demo available soon ;)

Hi Pawel, are you interested in additional monetization way of your game? If so, how can I get in touch with you? you can also text me to anton@applixir.com directly :) cheers!

Loving this so far!

Some things I noticed that were a bit odd. When you wall slide often you'd fall off the map and sometimes when you walk off a platform and press spacebar you wouldn't jump .

But obviously it's still in alpha so there's always a few things that need to be tweaked but I'm really excited to see what you do with this beautiful game in the future! :)

Thank you so much for playing this! Yes, the new demo is ongoing and the issues you mentioned are fixed! And I'm excited too! Follow my progress and if you have a Steam account, add it to your wishlist - this means a world to me!

wow just wow the second I click onto the game page I loved it it looked so good and showed of the game in a great and visual way!

the game its self looked awesome the art is spectacular and not get me stated on that lighting. I especially enjoyed the combat and the way it worked plus the animations on it just crazy good.

but while playing I did encounter this and I don't know of its meant to be or a bug.

anyway this game was a great experience and I would defiantly recommend it!

It's a secret area 😁 but seriously it's just a demo and that part of the map is meant to be visited after the events in the cave, it will be unlocked in the future, for now I put an invisible wall, but other players were also able to pass through it - that's why I changed a whole platforming engine so now it is not possible and you can wait for a new demo soon 😉 Thank you so much for playing! ❤️

Its pretty good, but I have several issues, while I like the story and the obviously Witcher based setting, i kept encountering glitches, from minor visual ones like the firing reticle staying on screen after trying to use a spell in the sword tutorial, to falling off screen and ending up on top of the screen, I see great potential in this game, but its glitches are holding it back.

Thank you so much for playing my game!

I'm so pleased you enjoyed my game and sorry for the bugs, but I'm still making it, it's an alpha demo and all reported bugs are already fixed, so I hope to release a new demo in month or two 😊

Alright, cool! I will watch this game's development with great interest.

Hi, just played the demo. Just wanted to say I love the art and feel of the game, nice smooth controls and animation too :)
On the downside, there are a lot of grammatical errors in the speech, which is a shame.
It is also a very slow start to the game just talking with little movement or progression.
Might be nice to have a bit of animation, perhaps one of them pacing about the room and moving the conversation outside when Fasteus knocks to freshen the scene rather than him come inside?

Also, it would be nice to have a downloadable version, I just paid $2 thinking I was downloading the game demo but just got a pdf file instead... That was dissapointing lol Should have read more carefully.

First of all, thank you very much for your support and insightful feedback!

If you want your money back, there is no problem for me ;) But also, I have a fresh new version of Witchcrafter, released 5 days ago,  currently in closed alpha - and I would love to send it to you, so you can check a progress! ;) could you just tell me what OS do you use? ;) In short: the story is expanded, there are sounds and music added, post-effects are added including pixel perfect camera, movement of the hero is improved including wall slides, spells are better and you can aim the projectiles, many, many bugs are fixed (of course there are still some things to improve, i.a. proof reading, more enemies and levels, etc, but I am making it every night a little better ;) )

So, once again, thank you for playing Witchcrafter and if you are still interested, let me know! ;)

Awesome, would love to play the demo! No need to send me the money back, happy to pay it. I'm on Mac unfortunately, need to get myself a gaming PC haha So many indie games that aren't available on Catalina because they're 32bit :'(

Thank you so much! You will get a full version when it's out! 😊 And now you can play it in the browser too! 😉

Current browser version crashes the first time I use the sword, tried it twice now. Crashed both times. I see you've made the intro even longer haha There are a great deal of grammar issues and poor english, I'd be happy to edit your scripts if you'd like?

It would be awesome! I'm working on totally changing the intro ;) Could you please reach me via DM on Discord, Twitter or Gamejolt?

Thank you very much! All the kudos to rvros, ansimuz and other great artist, but I'm striving to make as much assets as I can too! ;) I'm working on some new stuff and improved, more generic magic system with more interaction, so I hope I will prepare another demo in the near future ;)

Today I've released a new demo! :D it includes a teaser of the future intro trailer and the very beginning of the story - with a glimpse at dialogues and quests. It is described on the page and in the devlog, enjoy ;) Feedbacks are valuable as always! ;)

I've added a table with all spells from the demo, hope it will be useful ;) Also the updated version is uploaded with more indicators regarding combat, more powerful spells and a wins/fails score (that now will relatively increase/decrease boss HP in every try) is displayed at the end of each encounter :D

Looks really cool! But I can't figure out how to beat the boss. The elements supposedly give me something but no idea how to use it.

Thanks! :D actually there are many ways! Maybe it's because the spells are not explained, (normally every spell would be introduced) so I'll post their descriptions above ;) In my case, I like to use buffs like increased damage (fire E) and defence (earth E) , which gives you a noticeable advantage. Also one trick is to prevent boss electro charged attacks - when he is wet, his electric attack is unsuccessful and explodes on him instead of sending it on the hero. Also you can avoid him all the time and only use ranged missle attacks or traps ;) the main rule would be to avoid his attacks and deals him damage right after his attack ;)

It's great that you think so, thanks! :D

Man, it's awesome! I l'm waiting for more content, especially story with dark fantasy climat. Gameplay is really comfortable, dynamic, but also we have time for making a magic, so idea with board is intersting and well done. I l hope to play the full version. Good luck with work!

I'm really glad you enjoyed the game! It's my first review actually :D I'll do my best to make my dream come true and create a captivating gameplay that goes in parallel with a story! I'm happy that the idea of the Focus board looks reasonable for you, in the future there will be more elements, because Estel will learn how to merge the basic four together ;) of course there will be more carriers too, concluding in a lot of combinations then! 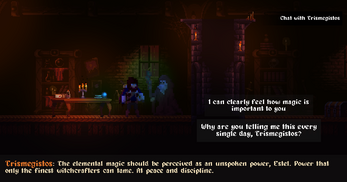 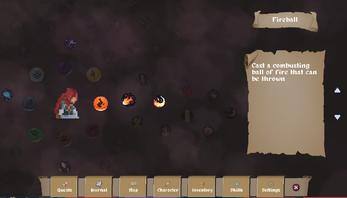 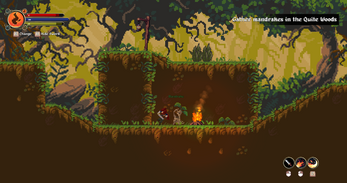